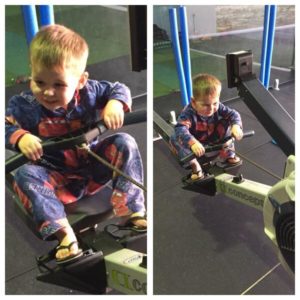 On the 25th August 2017 our little man Joel aged 2.5 years very suddenly came down with a fever and chills at 5pm. Vomiting, diarrhoea and confusion followed over the next 24 hours and by 4am Sunday 27th Aug he was being resuscitated in PMH Intensive Care Unit. The diagnosis was Strep A bacteria leading to Septic Shock, the bacteria is super aggressive and works fast but luckily is also very responsive to anti biotic which Joel was given in the nick of time and the doctors managed to save his life.

Joel spent 2 weeks in ICU where initially he was given a 15% chance of survival, the first 48 hours were critical to know if Joel had the strength to fight as the doctors could do no more, he was on max medication and support. Joel decided to fight, and has done so every day since then.

The following 4 weeks were spent on the ward where he received 2 weeks of dialysis to replace his kidney function, visits to theatre 3 times a week to change dressings on his limbs and battled unexplained fevers due to the amount of inflammation in his body. After that we returned to PMH weekly for a night or two’s stay where he went into theatre for bandage changes or amputations of some sort to each of his limbs.

Four months later and Joel closed the initial chapter and was left with a kidney function of 40%, amputation of the right foot, right hand, left toes and 4 left fingers due to the impact of the septic shock and the high doses of adrenaline needed to keep him alive in ICU. Most importantly though, Joel’s brain, sight, hearing, other organs and his spirit seem to have come out unscathed. 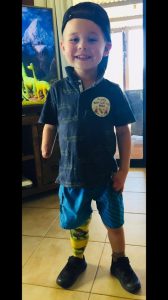 Joel is now in the rehab phase and is thriving. He is running around on his prosthetic leg and learning how to adapt to daily activities like dressing himself, eating, going to the bathroom etc. His kidney function has since improved to 55% and we are hopeful it will continue to rise and in turn avoid dialysis or kidney transplants in the future. He is due to start Kindy next year so our focus this year is his independence and scar management which will involve a series of laser treatments in theatre along with home care (creams, garments). He will also undergo surgery with Fiona Wood at the end of the year to try and improve the function of his left hand by lengthening the gap in between the short fingers he has left.

For the future, we aim to ensure Joel’s childhood and adult life is as normal as possible. He will return to swimming lessons this year and learn to adapt with his missing limbs and also begin playing sports again. At the moment the government provides one basic leg and one basic hand prosthetic to Joel each year. Anything more than that, like a swimming leg, one suited to running, riding his bike, all normal things kids like to do, we will have to fund ourselves for the time being. We want to ensure that any new high tech prosthetic that is available in the future is not out of his reach and he can have access to anything that allows him to achieve his dreams and live a fulfilling life. Our little man has already survived more than most of us will have to endure in our lifetime, he is a true fighter and we are so proud of the boy he is!

No matter what you need, the Morrissey Blinds and Interiors team are ready to help you make your Perth home even more beautiful.

Book your own complimentary in-home consultation and we’ll come to you with our Mobile Showroom. You can also phone us on (08) 9306 3717 or stop by our showroom to see what our installations look like alongside other high quality design and décor choices.

SAFE Perth is a not­-for-­profit organisation dedicated to the rescue, care, rehabilitation and rehoming of homeless and abandoned pets in Western Australia.

Pets who are rescued by SAFE Perth are placed with volunteer carers and live in­-home with their families. Whilst in care pets are assessed, given basic training and any vet care or treatments.

Our service area includes ALL AREAS of the Perth metro and country areas. If you are outside this area, please enquire